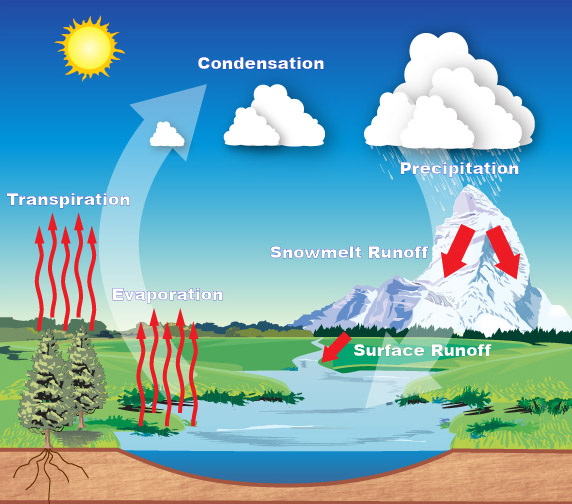 The hydrologic cycle involves the continuous circulation of water in the Earth-Atmosphere system. At its core, the water cycle is the motion of the water from the ground to the atmosphere and back again. Of the many processes involved in the hydrologic cycle, the most important are…

Evaporation
Evaporation is the change of state in a substance from a liquid to a gas. In meteorology, the substance we are concerned about the most is water.

For evaporation to take place, energy is required. The energy can come from any source: the sun, the atmosphere, the earth, or objects on the earth such as humans.

Everyone has experienced evaporation personally. When the body heats up due to the air temperature or through exercise, the body sweats, secreting water onto the skin.

Transpiration
Transpiration is the evaporation of water from plants through stomata. Stomata are small openings found on the underside of leaves that are connected to vascular plant tissues. In most plants, transpiration is a passive process largely controlled by the humidity of the atmosphere and the moisture content of the soil. Of the transpired water passing through a plant only 1% is used in the growth process of the plant. The remaining 99% is passed into the atmosphere.

Condensation is the opposite of evaporation. Since water vapor has a higher energy level than that of liquid water, when condensation occurs, the excess energy in the form of heat energy is released. This release of heat aids in the formation of hurricanes.

Precipitation
Precipitation is the result when the tiny condensation particles grow too large, through collision and coalesce, for the rising air to support, and thus fall to the earth. Precipitation can be in the form of rain, hail, snow or sleet.

Precipitation is the primary way we receive fresh water in earth. On average, the world receives about 38?” (980 mm) each year over both the oceans and land masses.

Runoff
Runoff occurs when there is excessive precipitation and the ground is saturated (cannot absorb anymore water). Rivers and lakes are results of runoff. There is some evaporation from runoff into the atmosphere but for the most part water in rivers and lakes return to the oceans.

If runoff water flows into the lake only (with no outlet for water to flow out of the lake), then evaporation is the only means for water to return to the atmosphere. With evaporation only pure water evaporated, and therefore any contaminates and salts are left behind. The result is the lake becomes salty as in the case of the Great Salt Lake in Utah or Dead Sea in Israel.

Evaporation of this runoff into the atmosphere begins the hydrologic cycle over again. Some of the water percolates into the soil and into the ground water only to be drawn into plants again for transpiration to take place.

This entry was posted in Basic Meteorology and tagged meteorology, water resources. Bookmark the permalink.