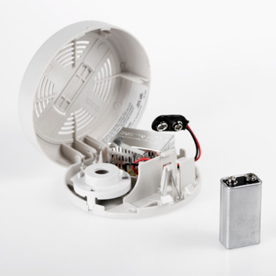 [CPSC.GOV] WASHINGTON, D.C. – Do you have working smoke and carbon monoxide (CO) alarms in your home? If not, the U.S. Consumer Product Safety Commission (CPSC) urges you to install them. Smoke and CO alarms add an important layer of safety to your home.

There are more than 366,000 home fires every year and more than 2,300 people die in them, according to CPSC’s latest Residential Fire Loss Estimates report.

If you do have smoke alarms, make sure they are working properly and have fresh batteries. According to the National Fire Protection Association (NFPA), two-thirds of fire deaths occur in homes without working smoke alarms.

When changing clocks ahead one hour for Daylight Saving Time this weekend, replace the batteries in alarms. According to the U.S. Census Bureau’s American Housing Survey for 2011, only three out of four homes reported they changed the batteries in their smoke alarms in the last six months. Batteries need to be replaced in alarms every year. In addition, CPSC recommends that consumers test their alarms every month to make sure they are working.

Smoke alarms should be placed on every level of the home, inside each bedroom, and outside sleeping areas.

While about 95 percent of U.S. homes report having at least one working smoke alarm, only 42 percent report having a working CO alarm, based on 2011 U.S. Census Bureau data. CO alarms can alert you and your family to dangerous levels of carbon monoxide inside your home.

According to the Centers for Disease Control and Prevention (CDC), more than 500 people die each year in the U.S. from unintentional, non-fire related CO poisoning. This figure includes incidents involving automobiles left idling in a home’s garage, which does not fall under CPSC’s jurisdiction. Each year from 2007 to 2009, there were nearly 170 deaths involving consumer products under CPSC’s jurisdiction, including portable generators and home heating systems.

Carbon monoxide is called the invisible killer, because you cannot see or smell it. This poisonous gas can come from a variety of sources and quickly incapacitate and kill its victims.

If you do not have CO alarms, get them. CO alarms should be installed on every level of the home and outside sleeping areas. Like smoke alarms, CO alarms need fresh batteries every year. They should be tested once a month to make sure they are working.

Combination smoke and CO alarms are also available all in one unit.