Severe thunderstorms with considerable potential for producing damaging wind gusts and a few tornadoes are expected across much of the southern through mid Atlantic Coast region, particularly across the Carolinas into southern Virginia late this afternoon and evening.

Large-scale upper trough amplification is underway across the Mississippi Valley vicinity, with a significant embedded short wave impulse forecast to continue digging into and through its base over the central Gulf Coast states by 12Z this morning. Models suggest that associated forcing for upward vertical motion will support lower/mid tropospheric cyclogenesis across northern portions of the central Gulf Coast states into the Cumberland Plateau/upper Tennessee Valley by late this evening. At the surface, the primary low may gradually become centered across the central through southern Appalachians vicinity before beginning to occlude by the end of the period.

Within the warm sector of the cyclone, across much of the southern through mid Atlantic Coast region, models indicate considerable strengthening of southerly lower through mid tropospheric wind fields, including to 50-70+ kt within the 850 to 700 mb layer. It appears this will coincide with an influx of moisture off the Gulf of Mexico, as well as off the western Atlantic. This is expected to contribute to weak to moderate boundary layer destabilization ahead of a cold front, which is forecast to surge eastward toward the south Atlantic coast by early afternoon, before advancing offshore and northeastward through the Mid Atlantic Coast region by late tonight.
This environment is expected to become conducive to considerable organized severe thunderstorm development, accompanied by the risk for strong, damaging winds and a few tornadoes.

Beneath the mid-level cold core of the evolving system, scattered thunderstorm activity is also possible across parts of the lower Mississippi Valley vicinity late this afternoon and evening.

Additional, widely scattered to scattered thunderstorm activity is possible ahead of a cold front advancing into the northern intermountain region and northern Rockies. 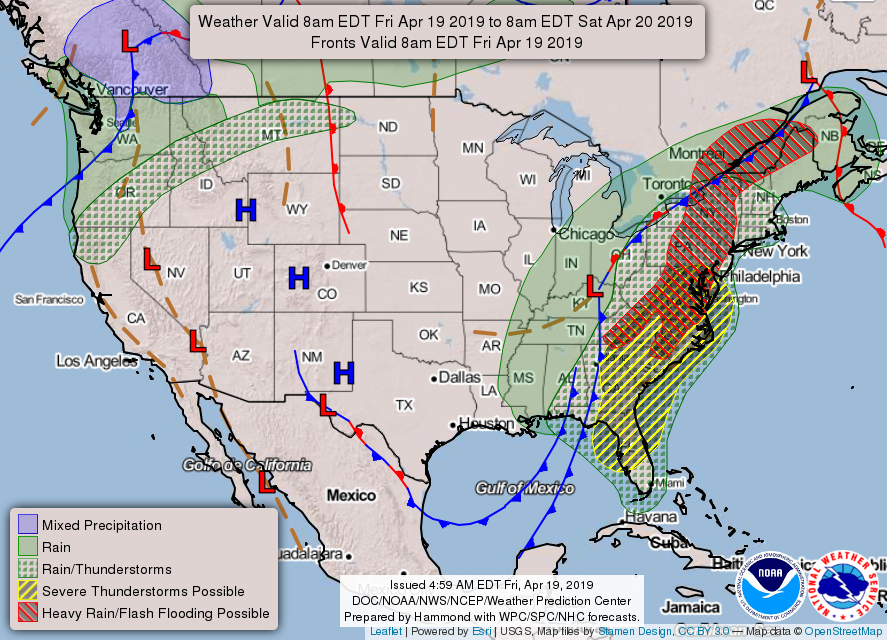 …Southern through Mid Atlantic Coast region…
There appears a substantial signal in model output, supported by current observations, that large-scale forcing for ascent ahead of the eastward advancing cold front may contribute to an evolving squall line across parts of northern/western Georgia into the northeastern Gulf of Mexico by 12Z this morning. The extent of inland boundary layer destabilization ahead of this activity, at least initially, remains unclear. However, coupled with insolation, boundary layer moistening is expected to support sufficient destabilization within the inflow region of the storms to support a gradual increase in intensity through midday, while activity advances toward the Savannah River, Georgia Atlantic coast, and Florida Gulf coast (near and north of Tampa Bay). Given the strength of the environmental wind fields, and the organizing convection, this likely will be accompanied by increasing potential for damaging wind gusts.

At the same time, guidance is suggestive that an influx of boundary layer moisture across the Carolina coastal plain into the piedmont may be accompanied by moderate boundary layer destabilization (including CAPE up to 1500 J/kg). In the presence of forcing for ascent aided by low-level warm advection, the initiation of discrete storms appears possible, perhaps including a few supercells accompanied by a risk for tornadoes.
The discrete storms may persist and spread north-northeastward into Virginia, as the northern flank of the upstream squall line advances northeastward. In the presence of the aforementioned strong (and strengthening) lower/mid tropospheric wind fields, near the mid-level inflection point between the downstream ridge and upstream trough, there appears potential for further upscale growth and acceleration of convection across the Carolinas into southern Virginia during the peak late afternoon instability. Given ambient mean wind fields near 50 kt, severe convective gusts may become fairly widespread, with a few peak gusts in excess of 65 kt also seeming probable.

While damaging wind gusts appear the main threat with the northeastward and eastward advancing line of storms, a few embedded tornadoes may also be possible. 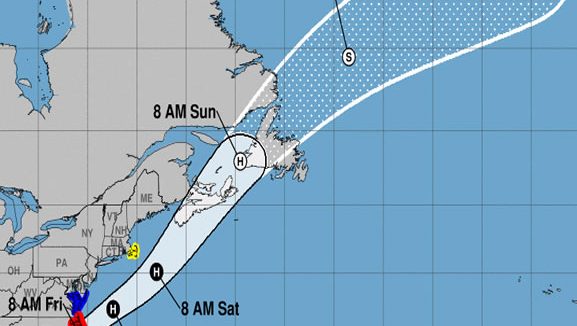