2019 Spring Outlook: Historic, widespread flooding to continue through May

[Source: NOAA] This winter has brought above to much above normal precipitation to much of the United States. Several portions of the country received accumulated precipitation exceeding 200% of average to date. Heavy rainfall mid-February through mid-March brought flooding across much of the Mississippi River Basin and its tributaries. Heavy rainfall on snow in mid-March brought significant flooding – including record flooding – to the Lower Missouri River Basin. Additionally, accumulated snowpack has been higher than normal in the Upper Mississippi Valley, the Plains of the Missouri River Basin, Red River of the North, and the Great Lakes basins. Basins with an increased risk of moderate to major flooding are as follows: the Upper, Middle, and Lower Mississippi River, lower Missouri, Red River of the North, Lower Ohio, Lower Cumberland, and Tennessee River basins. Additionally, an elevated risk of moderate flooding exists for basins in the Northeast as follows: the St. John, Penobscot, and Upper Hudson River basins. Minor flooding is expected across much of the region east of the Mississippi River, as well as the Pacific Northwest, and Sierra Nevada basins. Minor to isolated moderate flooding is also projected for the central Idaho tributaries to the Snake River as follows: the Big Lost, Wood, Upper Boise, Payette, and Weiser River basins. 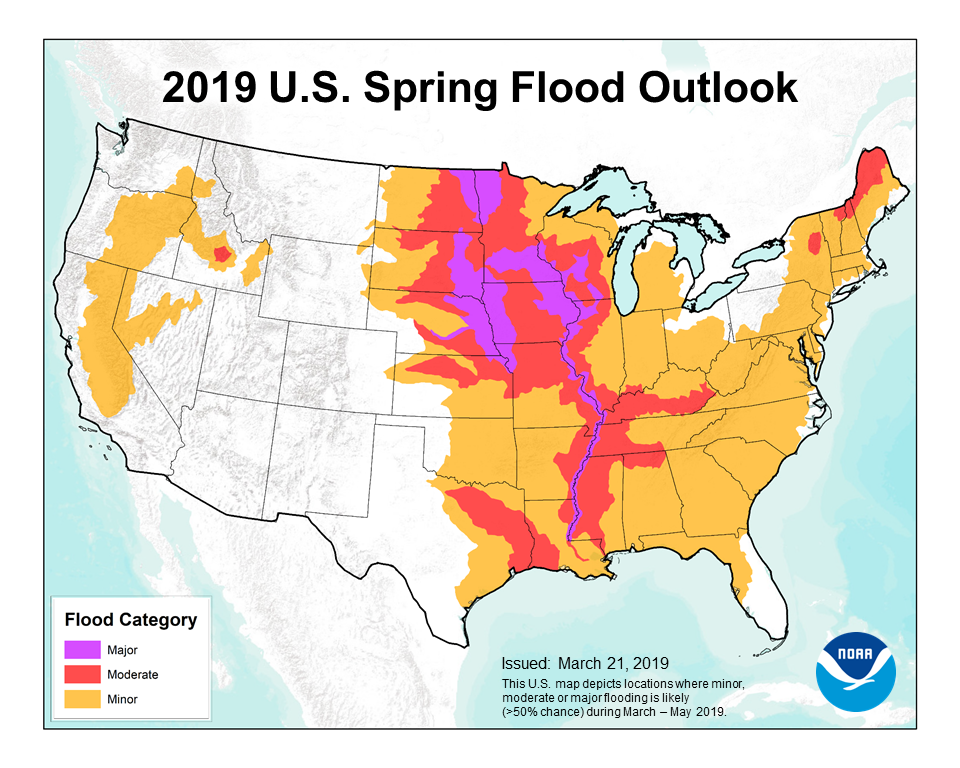 In Alaska, the spring breakup flood potential is forecast to be normal to below normal. Timing is expected to be slightly earlier than the median based on lower then normal ice thicknesses and higher than normal forecast temperatures.

The spring flood outlook for the Mississippi River system is anticipated to create conditions conducive to hypoxia development and lead to an above average to large hypoxic zone in the northern Gulf of Mexico this summer. Nutrient loads from river discharge into the Chesapeake Bay are projected to produce an average hypoxia zone this summer.

This entry was posted in Weather Articles and tagged flooding, Spring Flood Outlook. Bookmark the permalink.