The 2012 Atlantic hurricane season officially begins on June 1, 2012 and end on November 30, 2012.  However reliable these dates are, storms do still occur outside of them.  2012 has already seen Tropical Storm Alberto ahead of schedule showing up on May 19th and departing on the 22nd.

National Oceanic and Atmospheric Administration (NOAA) announced that the atmospheric conditions predict a normal hurricane season.  Bill Gray of Colorado State predicts reduced activity in comparison to the 1981-2010 climatology.  With 2011 having been a very active hurricane year, this brings a sigh of relief to most residents.  Some are still holding their breath due to the fact that 13 tropical storms barraged the region last year.

A six month season may not seem like much to most of us but to the residents of the areas affected by these storms, it is a very lingering 6 months.  The NOAA Climate Prediction Center anticipates a seventy percent chance of nine to fifteen named storms.  These storms will carry winds of 39 mph or faster and of these storms, up to eight will progress to hurricane standing which is 74 mph or more.  From those eight, three are predicted to reach 111 mph.  The Saffir-Simpson Hurricane Wind Scale (SSHWS) classifies hurricanes into five easy to understand categories.  To be in the classification of a hurricane, a storms wind must reach an excess of 74mph, which ranks it a Category 1.  From there, the rankings go up to a category 5, which must have winds exceeding 156 mph. 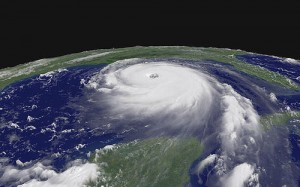 NOAA reminds us that aside from the prediction of a less active hurricane season, vacationers and residents must remain prepared.  There have been surprises in the past, particularly Hurricane Andrew, the Category 5 hurricane that devastated Florida in August of 1992.

There are two known factors that can predict the favorability of hurricane formation in the Main Development Region, which consists of the Atlantic Ocean and the Caribbean Sea.  Wind shear and ocean surface temperatures. If there is a stronger wind shear and a colder ocean surface in the eastern Atlantic it is considered a hostile hurricane developmental environment.

One extenuating factor to consider is if El Nino developed by late summer/early fall.  El Nino is a warming cycle of the Pacific Ocean waters that leads to climate changes.  It is the polar of La Nina, a cyclical cooling of the same waters.  During El Nino, conditions would be less hospitable for hurricane formation and magnification from August through October.  El Nino increases the wind shear, which impedes the proliferation of a swelling storm.  This materialization which Bill Gray states is highly probable, may set the number of hurricanes in the lower end of the predicted range.

Since Hurricane Andrew, great strides and advancements have been made in the monitoring and predicting of hurricanes.  There is still much to be learned about the instantaneous intensification of these storms and NOAA believes they can achieve this through their Hurricane Forecast Improvement Project.  This will allow for them to tell us when a storm is coming and give the expected intensity for better community preparedness.